International Driver’s Permit — Do I Really Need One?

In preparing for our RTW trip, I decided to get an international driver’s permit. In all my research, an IDP was mentioned over and over as being important to have, although no one went into any great detail. Getting an IDP made me think I was like a secret agent and I would get a booklet of my driver’s license information translated into 15 different languages. I romanticized the whole thing really.

About two weeks before our trip, I went to the AAA office to get the super cool international driver’s permit. In speaking with the AAA sales agent, I was informed that an IDP was actually just a document that says I can legally drive a car – already translated into 15 languages. All I had to do was show her my U.S. driver’s license and give her a passport-size photo and $15 and the international driver’s permit was all mine. Not super-cool or even a little bit cool.

The conversation with the agent went something like this…

ME: I guess I misunderstood what this was. I am not really sure that I need this as we won’t really be doing much driving in foreign countries, except for possibly Europe.

AGENT: Oh, if you are going to drive in Europe, you’ll definitely need one; it’s required.

ME: Um, we drove in England and Germany last summer and didn’t need one.

AGENT: Did you get pulled over?

AGENT: Well there you go.

Who can argue with that kind of logic? Feeling very skeptical and awkward after that conversation and more like I was being taken for $15 rather than a secret agent, I was shamed into making the purchase. But, only because I had read so much about needing such a thing when traveling… and it was only $15… and, honestly, it would have been kind of strange to walk away at that point.

When I got home and relayed the conversation to my spouse, he agreed that I had totally been taken for $15 and went on and on about that being the dumbest thing he’d ever heard of and a total waste of money. I remarked that it was only $15 and maybe he should consider it… just in case. He took one look at the flimsy booklet I had received in return for my $15 and said, “no way.” 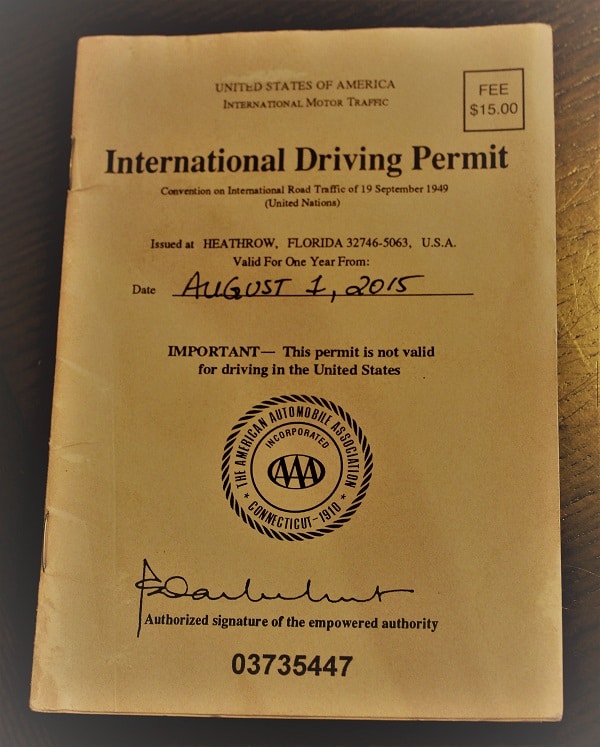 We had flown into the U.S. military base on Okinawa, but we wanted to get off the base and do some exploring of the island. We decided to rent a car, which we could do at our hotel. The only caveat… you had to have an international driver’s permit. For about ten seconds, I laughed and laughed. And then I realized that I was going to have to be the one to drive the car… on the wrong side of the road… on the wrong side of the car… with nothing in English… including the navigation system! And if all that wasn’t bad enough… I would have to take direction from my husband, my new navigator!

In the end, driving was stressful, but manageable. We had the agent program the navigation system to get us back to the base, which helped give both of us at least some sense of comfort knowing we could always get home. I only blew through a couple stop signs the first day (they look like yield signs and the only words are in Japanese). By the third day, I only turned on the wipers two or three times when trying to signal, because even those were on the opposite sides!

One of our first encounters when we got to Okinawa was with our hotel clerk, who had been on the island with her husband for almost seven months. We asked her about her favorite parts of Okinawa and if she had any suggestions on what to do in the area. We were both shocked when she said that she hadn’t been off the base. Even though driving was stressful at times, I am so glad that everyone in the family was up for the adventure of driving in Japan and getting lost in Okinawa. We were able to travel all over the island, view the East China Sea, eat interesting foods, connect with super nice people, and see some amazing sights!

Since this time, I have seen some conflicting information on when and where an international driver’s permit is required. I have seen some stories that mention it is actually the law that you have an IDP, even if the rental car agency doesn’t require it. I have seen that some rental car agencies are required to ask you for your IDP, but rarely do so. I have come to the conclusion that for $15 it’s better to have it and be able to explore than not have it and be stuck in one place!