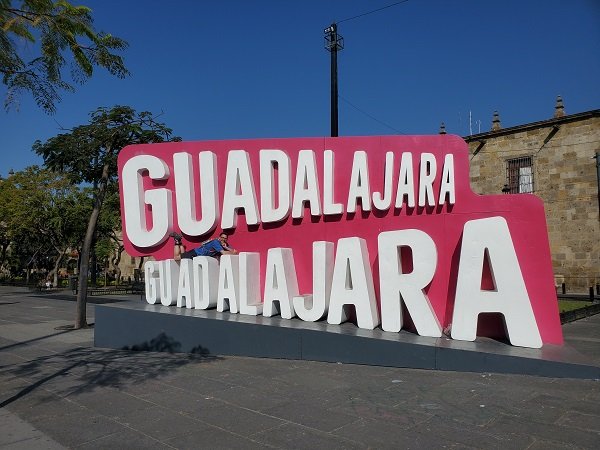 I thought we were flying!

This trip to Mexico has been largely unplanned. Ray and I wanted to get a feel for several of the cities around Mexico and decided early on to be flexible and open to whatever experiences came up.

Flying from Puerto Vallarta to Guadalajara is relatively cheap (less than US$50) as long as you make reservations a few days ahead of time…which we failed to do. So, we scrambled and took a bus instead. The ride was uneventful and we got to see the landscape as we transitioned from the ocean to an elevation of 5000 feet.

Guadalajara is a big city with 1.4 million people—the second or third largest city in Mexico (depending on what website you’re checking) and the capital of Jalisco state. And it is not necessarily a tourist mecca.

Our first venture was to find out more about the city, so we took a walking tour. We learned a lot about the history of the city and Mexico, but not well enough to repeat with any sort of accuracy here. The best stop for me was the Guadalajara Cathedral. There is something about big, old churches that fascinate me. I can’t even say exactly why. The draw is not the religious aspect, but more about the space itself. I feel like it’s a place where people—regardless of their beliefs—are respectful and kind to one another. And then, of course, there is the architecture. I’m especially fascinated at how old the buildings are and how well maintained the continue to be.

The next day started with an early morning venture to Guachimontones Ruins. Again, we learned a lot, but not well enough to repeat 😉 We were the only people at the ruins along with our tour guide and a young German couple.

The ruins are situated on a hillside overlooking a small picturesque town and lake. A now dormant volcano contributed to fertile soil and the surrounding hillsides are covered in blue agave.

These are some of the only ruins in Mexico that are built in a round pattern. When looked at from an aerial view, they appear to be several sizes of circles all connected together like the gears of a clock and there is some speculation that this could have functioned as a type of calendar, though little is known about the people who lived here.

Neither Ray nor I are big tequila drinkers. Sure, we have a margarita when we go out for a Mexican dinner, but that’s about the extent of our tequila drinking. All that changed on this trip. After the ruins, we headed straight for the first of three (or was it four?) tequila distilleries. By 11 a.m. we had walked through the entire distillation process and were sitting down to taste five different types of tequila. This time we were paying attention…we learned all about how to tell a good tequila and how to properly drink it, right down to the right way to breathe.

We follow up the tasting with lunch, another tasting, a double shot drink I can’t remember the name of, and another tasting…not one of the bunch was Jose Cuervo. Fun times were had by all.