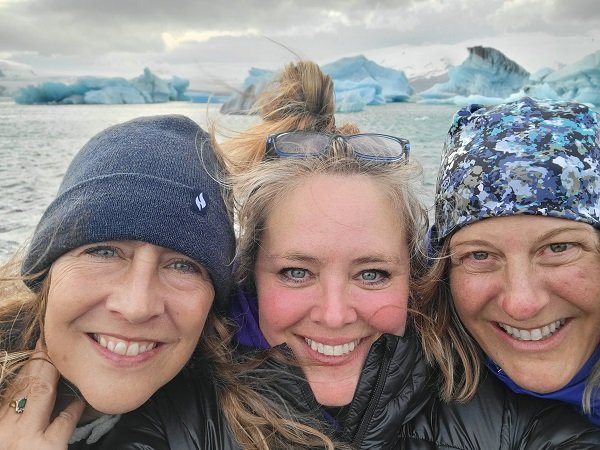 I missed a few days of posting, but the three of us (Cami, Carol, and I) were focused on the race and our Rest, Race, and Recuperation strategies. Read Cami’s race report for more info on the race itself. In short, we all ultimately finished, needed a lot of sleep, and walked with a little more caution than normal.

After we recovered enough to start the next leg of the journey, we decided to had east for a few hours (~4.5). During checkout I asked the gal at the front desk if she had any suggestions on where we might visit along the way. I had done some research and had a list that I gave to her and she proceeded to add even more. Spoiler alert – everything that she told us turned out to be amazing. I really can’t rave about the Greenhouse Hotel enough.

I used all of the Icelandic names for the places we visited so you can have as much fun trying to pronounce them as we did. It’s super fun to try to sing along to Icelandic music too!

We had planned to stop at this waterfall after our trip to Westman Islands but on that day it was totally fogged over, so we made it our first stop on the trip east. This waterfall is particularly cool because you can walk behind it.

Dyrhólaey was once an island before joining up to the Icelandic mainland through volcanic activity. In ancient times, passing sailors referred to Dyrhólaey as “Cape Portland.” There is also a working lighthouse here, but was not very pictureworthy!

We turned off the highway onto a gravel road for the next stop. There were few signs and just another car or two and if it weren’t for the dust of the car ahead of us, there’s no telling where we might have ended up. Luckily the site wasn’t far from the main road.

This one took a little longer to get to once we left the main road and we were all a bit skeptical that there would be anything to see. We were driving on a gravel road through seemingly small rolling hills covered in golden grass and moss. But then we parked and walked down to see an amazing canyon. Cami even remarked that if this place had been the tectonic plate split it would have been much more impressive!

The final stop for the night was Diamond Lagoon or Diamond Beach. This was definitely a highlight of the trip. There is a large lagoon at the base of a glacier. When pieces of the glacier break off, they slowly travel through the lagoon on their way out to sea. The views were incredible and one of the most beautiful sites I’ve ever seen. Cami was trying to make some new friends of the seals that were swimming among the bergs.