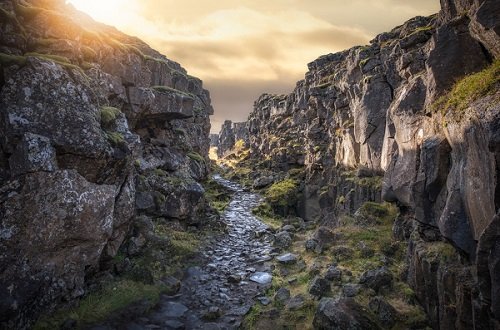 When sunshine and blue sky greet you in the morning, it’s bound to be a good day. Race day is still a few days off, so on day 2 we set out to explore the Golden Ring (or Golden Circle). The Golden Ring hits some of the major highlights of Iceland: Geysir, Gullfoss, and Þingvellir National Park.

I only learned in writing this article that the namesake of all geysers around the world, the Great Geysir, is currently dormant and is not in fact the geyser we saw today. Apparently, the Great Geysir in Iceland was the first ever to be described in a printed source, giving it the distinction as the one for which all others are named. Though, according to the Google, Old Faithful in Yellowstone is still more famous.

Records report that the Great Geysir could reach heights up to 558 feet. The geyser was recently revived by an earthquake in 2000 and erupted a couple of times a day for a few years, but is once again quiet.

What we viewed today was the Strokkur Geysir (the Churn), which spouts water as high as 100 feet every few minutes. We stood with cameras ready and had a few false clicks, but eventually we all captured the eruption. Check out the bubble that forms before it blows…you don’t see that kind of action at Old Faithful!

Our nest stop was Gullfoss waterfall. The water in the Hvítá river comes from the Langjökull Glacier then cascades 105 feet in two stages. There is a walking track that takes you to the very edge of the falls and if you look closely at the photo, you can see people out on the ledge. Hopefully this gives some perspective as to the waterfall’s size too.

In a search on the falls, I found a bit of history on the Guide to Iceland website:

In the early days of the last century, Gullfoss was at the center of a controversy regarding foreign investors and their desire to profit off Iceland’s nature. In the year 1907, an English businessman, Howell, sought to utilize the waterfall’s energy and harbored ambitions to use its energy to fuel a hydroelectric plant.

At the time, Gullfoss was owned by a farmer named Tómas Tómasson. Tómas declined Howell’s offer to purchase the land, stating famously “I will not sell my friend!” He would, however, go on to lease Howell the land without the knowledge of a loophole that would allow him to proceed with his plans.

It was Tómas’ daughter, Sigríður Tómasdóttir, who would lead the charge to stop Howell’s ambitions. Having grown up on her father’s sheep farm where she helped pave the first road to Gullfoss, she sought to get the contract nullified, hurriedly saving her own money to hire a lawyer.

The ensuing legal battle was an uphill struggle; the case continued for years, forcing Sigríður to travel many times by foot to Reykjavík, a distance of over 62 miles. Circumstances became so difficult that Sigríður threatened to throw herself into the waterfall if any construction began.

Her tenacity, however, resulted in success. In 1929, Howell withdrew from the lease, unable to keep up with the costs and difficulties of his plan. The waterfall thus fell back into the hands of the Icelandic people.

Today, Sigríður is recognized for her perseverance in protecting Gullfoss and is often hailed as Iceland’s first environmentalist. As such, she is one of the most famous figures in Iceland’s history. Her contribution is forever marked in stone; a plaque detailing her plight sits at the top of Gullfoss.

Our final stop on the golden ring road was Þingvellir National Park. (That first letter is pronounced th as in thing.) This is a place I really wanted to see. I mean where else in the world can you see tectonic plates? Cami was less impressed…at first. After all, the area could have been just another rock canyon. What made this one so special? Couldn’t you see tectonic plates somewhere in California too? What is a tectonic plate anyway and how do they work?

All valid questions that made me dig up some more info. I started with defining a tectonic plate. The link provides an in-depth answer but in it’s simplest form, a tectonic plate is a massive slab of solid rock composed of the top couple layers of the earth (ocean, crust, and upper mantle). The link said “lithosphere” but I had to look that up too. Continental crust is made of of lightweight materials, but oceanic crust is much heavier and denser allowing it to sink under the continental plate. In short, the slabs move around and have been drifting about on the surface for billions of years.

As readers closer to my home might also be aware, this process is happening now off the coast of Oregon and Washington where the Juan de Fuca plate is sinking beneath the North American plate and will someday be entirely gone.

But back to Iceland… Iceland sits on top of the boundary between the Eurasian and North American plates, which are moving away from each other. Volcanic activity and earthquakes occur with some frequency at the boundaries of the plates, which explains why Iceland has its share of both. The two plates under Iceland are moving apart at a rate of 2.5 cm per year. That doesn’t sound like a great distance, but in geological terms it’s super speedy! Þingvellir National Park is literally the only place in the world where you can see the Eurasian and North American plates above ground. The geological process is playing out right here before our very eyes!

At the end of the day, I’m still not sure I’ve created any more fascination for Cami. And that’s ok. I discovered a lot more in my research, which made my visit to the park even more fascinating and I didn’t even hit on the history of this place…that’s a whole blog post in itself.

What do you think? OMG I want to see it too? Or just another rock canyon?