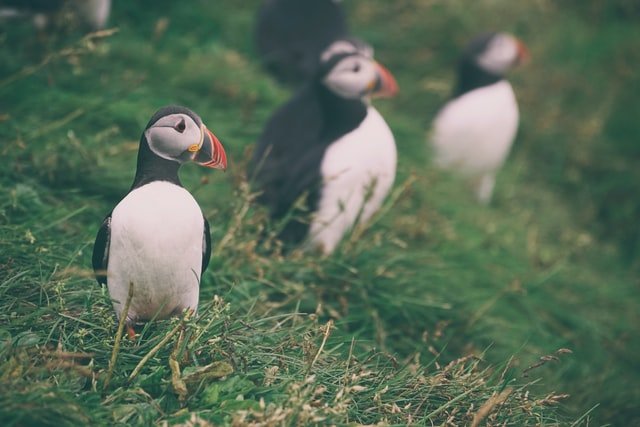 One of Carol’s wishes on this trip to Iceland was to see puffins. The best place we found to do that was at Vestmannaeyjar or the Westman Islands off the south coast of Iceland. We booked a trip, figured out the ferry schedule, and worked backward to figure out a departure time. On the way to the ferry the next morning, we were again hit with a deluge of rain, which made the prospect of being outside on a boat all day a little less exciting. Luckily, the rain cleared by the time we got to the ferry terminal. We parked, bought tickets, and had an uneventful ride across the water to Vestmannaeyjar.

As an aside, there is one thing about Iceland that none of us has found particular joy in yet…the coffee. It’s not terrible, but it’s nothing to write home about either. It is mild at best and we all find we’re drinking a lot of it to match our brews back home.

Anyway, we grabbed a quick bite to eat then headed over to the tour office to check in for our tour. We’d made our reservations without issue the night before (Wednesday) for a tour on Thursday. As we checked in we were informed that there was no tour scheduled for the day and no reservations. I was afraid we’d hit our first snag of the trip.

We spoke to a manager who informed us that she’d sent us a cancellation notice on Monday. Um, I don’t think so. She assured me they issue a refund, but there was in fact no tour. She did suggest we go over to another tour office to see if they had any boats going out. And as you can see from the grin on Carol’s face, we were in luck!

Even though we didn’t get the tour we had chosen, we did get to walk through their facilities and see all the fishies in aquariums and some puffins and pufflings (baby puffins) in rehabilitation.

Cami’s favorite by far was seeing the beluga whales, one of whom she claims fell in love with her at first sight. Though all she’ll say about her whale conversation was that he said, “Hi. I love you.”

The tour was a bit chilly, but we were prepared and the rain held off the whole time! We went around the island and visited the puffin lookout. Really, the whole island had puffins and a couple other type of birds nestled in the cliff faces on every side. I was surprised at how blue the sea was. I feel like all I see in the Pacific Northwest is grey water, and I expected it to be similar here, but it was anything but.

When we landed, we had just enough time to grab a beer before jumping back on the ferry to the mainland. Actually, that brings up another issue…beer. Granted we haven’t sampled too many, but the beer here is also a bit dull. Perhaps that’s our Bellingham beer snobbery coming through.*

*I’d like to add to my previous statement on beer. Since I began writing this post, I’ve had the opportunity to sample a beer here at the Greenhouse Hotel that I love. It is a mango IPA, which is just the right mix of juicy and hazy IPA. Mmmmmm.