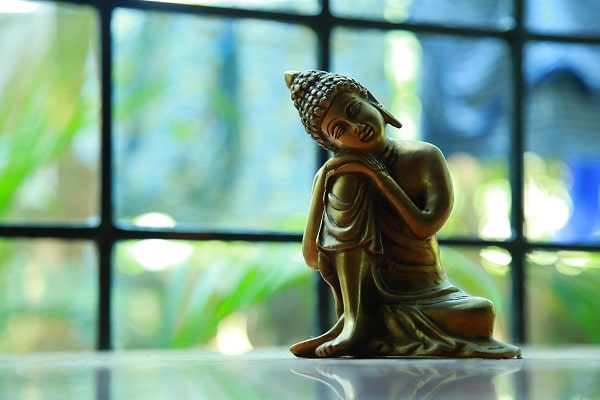 We ducked into the Buddha Tooth Relic Temple and Museum in Singapore to get out of the torrential tropical downpour. Well, that and because my husband is a dentist. How can you pass up a museum dedicated to a tooth when traveling with a dentist?

The museum claims to house the left canine tooth of Buddha, recovered from his funeral pyre in Kushinagar, India. We wound our way from floor to floor in this five-story, red building exploring artifacts and reading a detailed history of Buddha. I found a statue of my personal guardian deity based on my zodiac sign and the year of my birth. The accompanying sign read: A personal guardian deity serves as a source of solace, spiritual support, and inspiration. Simply having a personal guardian deity is not enough, however. One must actively work on purifying negative tendencies and increasing our store of merit and wisdom in order to strengthen our connection to our deity and speed our progress on a spiritual path.

I liked the sound of purifying negative tendencies but had no idea how one would even begin to embark on such a process. I had been mired in a state of grief after the loss of seven family members over a five-year period, including my mom, dad, and 23-year-old brother. The emotions meant to be temporary staked their claim on my mental processing and hunkered down for the long haul, morphing into anxiety, despair, and resentment. The more I thought about this purification, the more I understood this is really what I needed.

When we reached the highest floor of the temple, we stepped over the threshold to find a large room flanked by meditation spaces. An aisle led to a glassed-off area the size of a small golden bedroom. A giant stupa made from 700 pounds of gold sat in the center of the room and right in the middle of this gleaming shrine was a miniature gold pavilion which housed the tooth of Buddha. Or so we were told.

We all stood staring into the golden housing searching for anything resembling a tooth.

“Where is it?” I whispered. I looked to my husband, certain a dentist would be able to identify the tooth. “Is that it right in the middle?” I asked.

“You think so?” I asked, giggling a little.

As we tried to positively identify the tooth, a museum guide approached and led us to a monk who had been sitting in meditation in the corner of the room. I was initially hesitant, certain we were being reprimanded for being disrespectful, but the guide said the monk wanted to sing a blessing for us.

The monk was dressed in the traditional Buddhist triple saffron robe and had a necklace of large brown beads strung around his neck, reaching almost to his waist. He greeted us with palms pressed together and a gentle bow. Incense burning in a small pot produced a sweet haze in the corner of the room. The monk did not speak but looked at each of us for a long moment. His gaze along with his beatific smile put me at ease. I looked back at his eyes, not wanting to break the connection. I felt as if he could see inside my soul and could feel the intimacies of my struggle and the heartache I’d experienced.

The monk turned his head toward the guide and nodded. The guide asked us to kneel on the bare wood floor. The monk then knelt in front of us and began to sing a blessing in a language that was foreign, yet soft and melodic.

The pain in my knees faded as the singing mingled with my thoughts. My mind drifted around having a personal deity and purifying negative tendencies. It made perfect sense that if I didn’t replace negative thoughts, they’d make a home in my mind and become harder and harder to kick out over time. If I wanted to break up the negative cloud in my brain, I would have to work at it.

After a few minutes, the song started to lose clarity in my mind, replaced by an ache in my knees. My legs started to tremble slightly, and I felt lightheaded. And just as my thoughts shifted back to my physical being, the blessing ended. The monk smiled and bowed, his head almost touching the floor. We returned the bow and thanked him. The guide collected our beads and led us back to the tooth shrine where he directed us to meditate for a few minutes. Meditation was not a practice we were accustomed to, so we simply stood quietly in this holy space, alone with our thoughts for a few minutes, each still searching for the tooth.

I knew something had changed within me. I knew I had to keep moving forward and stop replaying the messages from the past. I had to practice staying present in the current moment. Not in an effort to forget my loved ones who had died; that would never happen. But to honor the people with whom I was with, and myself. Shift my attention from the negative thoughts to the present experience.

Feeling awkward as he tried not to look disrespectful, my husband asked, “Have we meditated long enough?”

I looked at him. “Are you still trying to find the tooth?”

“Actually, I was wondering if the monk has to shave his head every day,” he answered.

I tried to suppress my laughter. “C’mon, let’s go,” I said. With a nod toward the door, I led the way out and we made our way back to the hotel.

I didn’t mind not finding the tooth. I had found something much greater.