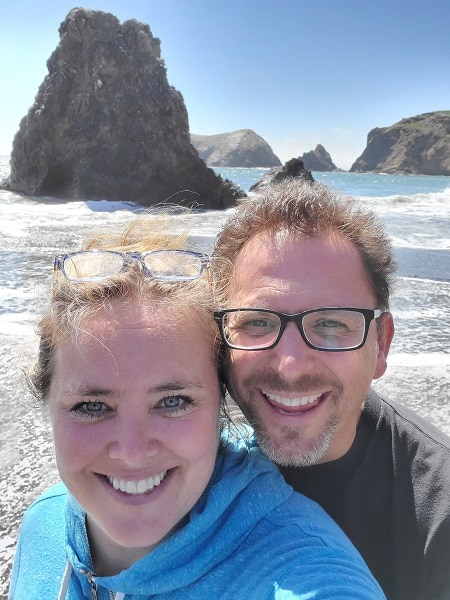 We arrived in San Francisco in the early morning, rented a car and immediately proceeded to drive right back out of town. Knowing we were going to spend the bulk of our 5 days in the heart of the city without a car, we wanted to spend our first free day getting in as much exploration as possible.

In typical Ray fashion, he researched before our trip and found a hike 45 minutes from the airport.

Tilden Nature Area includes a carousel ride, botanic garden, multiple picnic areas, a lake for swimming, and 2,079 acres in which to lose yourself among the wildlife.

After a quick stop for breakfast in Berkeley, we hit the dusty trail. During the four-mile walk, we encountered more lizards and snakes than people. Frequent rustling in the dry leaves on either side of the trail made me about jump out of my skin. Snakes and lizards are much quieter in the moist undergrowth of the Pacific Northwest I’m used to.

Once at the top of the ridge, San Francisco was visible in the distance, though covered by a thick, fog-like marine layer. Looking over the backside of the trail, the golden hills rolled as far as we could see.

We were done with the hike by 1 p.m. but still had half a day of rental car we didn’t want to waste. Instead of heading straight back to the airport, we opted to figure out another adventure over an ice-cold microbrew. Luckily, the bay area has almost as many as Bellingham and our search was short.

We found Armistice Brewing Company in Richmond where I had one of the best hazy IPAs ever. Yep, even among Bellingham snobby beer standards! It had a tangy pineapple/grapefruit flavor and went down easily. A little off the beaten track from SF, but worth the drive!

And while quenching our thirst, we decided we wanted to go to the beach!

Golden Gate National Recreation Area is huge and sits on both sides of the Golden Gate Bridge. We opted for a walk on Muir Beach and again found ourselves practically alone.

Maybe this beach is crowded on sunny, tourist-heavy summer days, but on this early September afternoon, we enjoyed a quiet walk.

By 4 p.m. we were sufficiently tired out from the hike and beach walk (maybe a little from the beer) and decided to start heading back to the airport. But, as we wound our way along the Pacific, we found several places to pull out for fabulous views of the city of San Francisco and the Golden Gate Bridge. We stopped at the last pullout, Battery Spencer, and walked to the point.

During the early 1900s, Battery Spencer was one of the main protection spots for the San Francisco harbor. The area featured 12” guns that were manned by the military and a few buildings for housing the generators and shells. Operated on and off until World War II, today Battery Spencer offers visitors a piece of history and amazing views of the bridge and city.

Though we hit the point at a perfect time of day when the marine layer had dissipated, by the time we crossed the bridge, the clouds were already starting to roll back in. Sometimes timing is everything!

Interested in things to do in the city? Check out San Francisco in 2.5 Days.