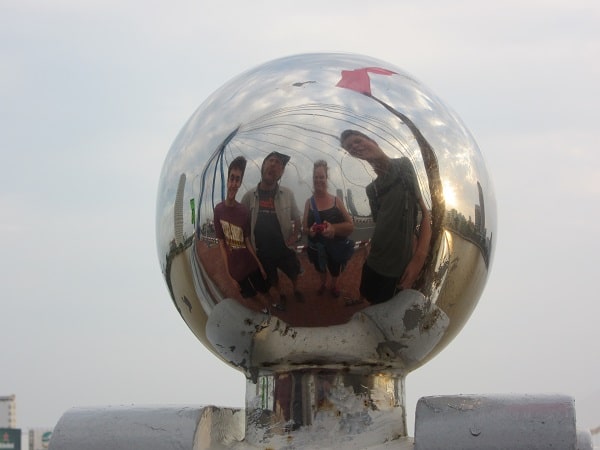 March 16, 2021—a little less than five months from now—is the scheduled publication date for Square Up: 50,000 Miles in Search of a Way Home. (Coincidentally, it’s also right around the time we returned home five yeas earlier.) I am now in the process of sending advanced copies to other writers seeking blurbs. Keep your fingers crossed; I’ve sent out letters to some pretty big names. They can only say no, right?

I’ve especially enjoyed watching as Facebook pops up memoires from five years ago when we were just wrapping up our time in Da Nang, Vietnam. Since Ray had a month-long volunteer gig with East Meets West Dental Clinic in Da Nang, it’s one of the cities that we became most familiar with.

In reading through my blog posts from this time, many of my posts centered around food. And while a few food stories did make it into the memoir—eating tarantulas in Cambodia—there were plenty that were cut. Here’s a couple of our favorite food places in Da Nang…

One favorite restaurant sold one dish exclusively, which came to be a favorite. It is called Mí Quảng. According to Wikipedia, the dish is made with rice noodles tinted yellow with turmeric. The meat is typically chicken, fish, or beef. The broth is made by simmering the meat in water or bone broth and is seasoned with fish sauce, black pepper, shallot and garlic. Extras include hard-boiled egg, peanuts, chả (Vietnamese steamed pork sausage), chili pepper or chili sauce, fresh vegetables including: water mint (rau húng lủi), basil, Ipomoea aquatica, Vietnamese coriander, sliced banana flower (bắp chuối bào), bean sprouts, lettuce, and pieces of toasted sesame rice crackers, called bánh tráng me. Although we tried this dish at several establishments, Mỳ Xứ Quảng definitely made it the best. I would recommend adding most of the veggies, the crackers, and then topping it off with fresh-squeezed lime juice. The hotter the better…if you like it hotter, there are always sliced chilies you can add to the mixture. This could definitely be a recipe to try when I return.

**A little foresight perhaps since my next book is all about soup???

The Tulip Restaurant was a place that we visited with some regularity when staying nearby. They serve ginormous Czech beers and their 22-page menu offers a variety of selections in each of the following categories: cigarettes (to smoke while dining, not to eat), appetizers, salads, vegetables, soup, shrimp, crab, squid, clam, eel, frog, fish, beef, deer, pork, pigeon, goat, chicken, duck, rabbit, lamb, tortoise, hot pot, rice, noodle, and porridge. The most adventurous we got on this menu was the fried tilapia.