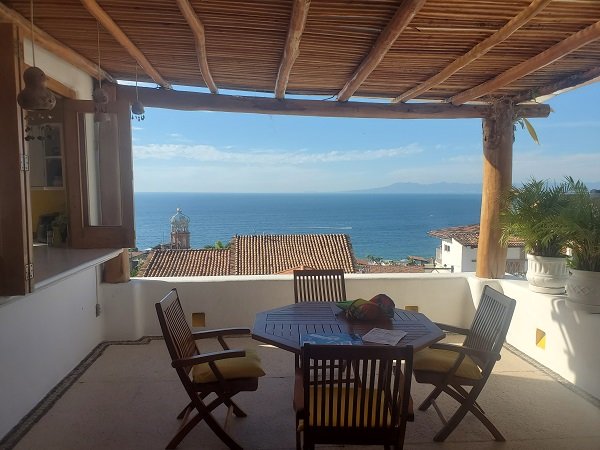 Our first full day in Puerto Vallarta! Today we went on a food tour starting at 9:30 a.m. A little early to start a taco tour I thought, but little did I know that certain stands close as soon as they’re sold out for the day, which could be as early as 10 a.m.

I was also reluctant to go on a bike tour. Sure, I know how to ride a bike, but I am not the most stable biker, and I worried about being slow and not being fit enough for tough terrain. But I went in with an open mind and threatened Ray if he left me.

The group was small—guide Homero and four guests (including Ray and me). We rode about a five mile circle around the city, from 5 de diciembre, through centro, and to the end of the pier in old town/romantica zona/emiliano zapata, but not always in the touristy areas.

We started at Tacos de Carnitas Gradilla, where we had carnitas “breakfast tacos.” Why breakfast tacos? Because the man who preps the pork, starts at 4:30 a.m. and only prepares a certain amount every day. When the pork runs out, it’s closing time. The record is 10 a.m., so if you don’t get to the stand early, you will miss out. The twenty-minute wait in line was well worth it!

We learned that this family had been in business for generations and that the flavor of the meat was due in large part to the lard that had been handed down from father to son—a great honor. The taco was delicious and perfect for a first meal of the day.

Next stop was Tacos Beltran where we feasted on carne asada mixed with crispy pork shoulder. Hard to believe, but this was even more flavorful than the first taco. The crispiness of the pork shoulder combined with the carne asada provided an explosion of flavor.

We did have another wait in line, but it gave us time to digest the first taco. Homero also pointed out that a busy taco stand always means good food to be had.

I was also happy that the terrain, though bumpy on cobblestone streets, was relatively flat and easy to navigate.

Our third stop was for lamb barbacoa tacos. The lamb was melt-in-your-mouth tender and the tortilla was fried, adding some crispiness to the bites. This blog is going to get really boring because all the food was amazing, but that’s what going on a local food tour is all about, right? I guess if I had to pick, this might have been my least favorite. However, if it had been the only place we stopped, I would have been totally happy.

After a longer ride, we stopped on the Malecón for a traditional Mexican drink called Tuba. The sign indicates that it is the sap of the palm tree, slightly fermented apples, strawberries, honey, pecans, sugar, and purified water. A nice refresher half way through the tour.

Our final taco stop was Tacos El Cuñado where we had pollo machaca tacos. The traditional meat for machaca is beef, but these were chicken and egg tacos grilled with flavorful and a little bit of spice. The tortillas are then fried on the same grill to soak up the sauces. You have to eat the whole thing in a couple of bites or you’ll end up with a soupy mess. Mmmm!

After we were full of tacos, we stopped at a local brewery for a beer. It was probably after 12 p.m. somewhere in the world, but I’m not really sure if it was in PV. With all the biking and tacos, we lost track of time. I had a beer called something like Insanity that was a mango milkshake double IPA. It does sound a little loco, but was a perfect mid-morning beer! The 8.5% didn’t hurt.

Our final stop was for dessert…Oaxacan ice cream. I had mamey (a type of avocado – creamy and sweet) and Ray had a mixed berry ice. Both delicious and a perfect end to an amazing food tour.

This is a definite recommend for Puerto Vallarta. With a bike tour, you get a different set of folks than you would on a walking tour. You get the people who want a little more adventure, and the excitement was definitely to be had on this tour. Biking over cobblestone streets into rural neighborhoods from one town to another, we got to see more of the city than we would have covered just walking.

Before we left on this trip, Ray promised a day on a luxury boat for a full day of snorkeling. But… he assumed there would be room and did not book it before leaving, so when we got here it was full. We really wanted to snorkel, so we found a tour that was open, with far less luxury. The boat took us and around fifty others on a two and a half hour cruise out to the Marietas Islands at the edge of the Puerto Vallarta Bay. We then got to snorkel for about 30 minutes, hang out on a beach for another 15, then load up and head back to PV. There was food and music, games and drinks, but the tour itself was just okay. Definitely the way to go for first time snorkelers just to check it out but 30 minutes of snorkeling on a 7 hour tour…not exactly what we were looking for.

What made the trip exciting, however, was the frequent spotting of humpback whales. Sometimes one or two, sometimes a group of five to ten. They are enormous and a couple times swam quite close to the boat. On our way back to PV, we also encountered a huge pod of dolphins, around 50 or more, jumping out of the water and trailing the boat for a bit.

Our time in Puerto Vallarta is short on this trip. We’re headed to Guadalajara next. We’ll spend a day getting plane tickets, hotel reservations and figuring out a schedule, and sleeping in…this is a vacation after all!!