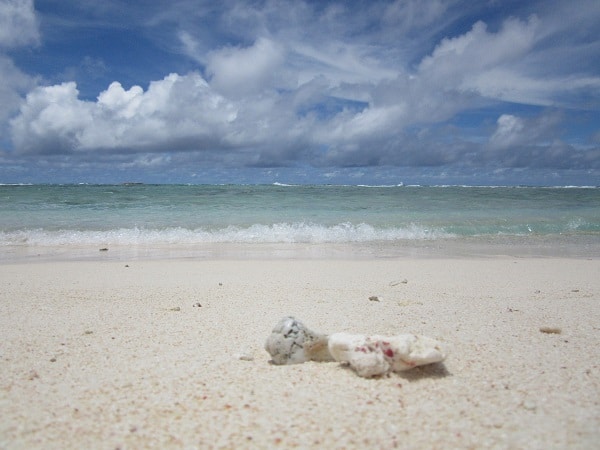 When you think of tropical destinations, is Guam on your list of must-see places? Most people, if they have even heard of Guam, know it as a U.S. Territory that is home to both a U.S. Air Force and a U.S. Navy base. Or it’s a place to go for hard-core scuba divers – the only place in the world, in fact, where you can touch shipwrecks from two world wars.

Guam is beautiful – the surrounding sea is a mixture azure blue and glowing turquoise water and the greens of the surrounding jungle make you want to lose yourself among the vines. I took hundreds of pictures but never felt like I captured the incredible beauty of this tropical island. But… being that it is a small island in the middle of the Pacific Ocean, prices here are a little steeper than on the mainland. I saw one roadside stand selling dragon fruit for $8… each!

With temperatures that hover between 75 and 90 degrees and 80% humidity every day of the year and the ocean a pleasant 86 degrees, Guam is the perfect place to get outdoors and have some adventures that don’t cost a thing! Here are a couple of my favorite places to enjoy the water in Guam!

Located in the northernmost point of the island, this area is owned by the U.S. Fish and Wildlife Service and is part of the Guam National Wildlife Refuge. The beach area is arguably one of the most pristine beaches on Guam. White sandy beaches are just steps away from convenient cutouts for parking. When tides are calm, you can spend hours snorkeling, drifting on the waves, and watching schools of fish dart from one place to the next. Just don’t forget the sunscreen!

If you prefer to spend your time out of the water, or in the cool shade of the trees, be on the lookout for small hermit crabs. Although they might be hard to see at first, if you stare at a patch of sand and shells long enough, you will eventually see many of the shells start to move around. The beaches are literally crawling with these little guys, better known in Guam as dukduk, the Chamoru name for hermit crabs. They are called dukduk because that is what you say to a hermit crab in order to call it out of its shell; you hold the shell up near your mouth and say, “Duk-duk-duk-duk…” until the crab emerges.

One of my favorite stops for water sports was Merizo Pier, located on the southwest side of the island. If you have the time and the money, you can take a ferry over to Cocos Island for the day or rent jet skis and ferry yourself.

We got up early and headed to Merizo Pier so that we could do some snorkeling. Those who weren’t snorkeling spent their time jumping off the pier into crystal clear blue water. Another tourist joined in the fun and jumped with us for quite a while. No need to speak the same language… just a gesture to himself, to them, and to the water was enough to know that he wanted to join in the fun.

For those of us who snorkeled, we ventured out from the pier about 50 yards across open water to a shallow sandbar and reef where we saw spiny blue sea stars and fish of every color and shape. The swim over to the reef was a bit disconcerting, however. As you swim, the water gets deeper and deeper until you can no longer see the ocean floor, the number of fish swimming around you become fewer and fewer until you are completely alone, and then Jaws music starts running through your mind and you start praying that all your wounds are healed. I have to say that I was a wee bit nervous about that swim. When you reach the reef, all is well again and the beauty of the reef makes you forget all about the imagined sharks alerted to your presence. And then you have to make the same swim back to the pier!

Thankfully no sharks were spotted and I was told that the only sharks that I might have encountered would have been harmless reef sharks. Somehow I don’t really think that harmless and sharks are two words that go together.

The Inarajan Pools are natural wells filled and filtered by the ocean. The pools are surrounded by coral outcroppings on one side and a public park with BBQ pits and covered seating on the other. The coral provides the pools with protection even on days with stormy seas. What was once a diving board is now a dilapidated platform of which many still make use. Water socks are recommended as the top of the platform is uneven and you will need to climb up rocks to get out of the pool. Inarajan Pools are located on the southeast side of the island just around the bend from Merizo Pier.

Not only do these watering holes provide relief from the tropical heat, but they also get you off the beaten track and exploring this tiny island in the middle of the Pacific.