10 Favorite Places Around the World… So Far 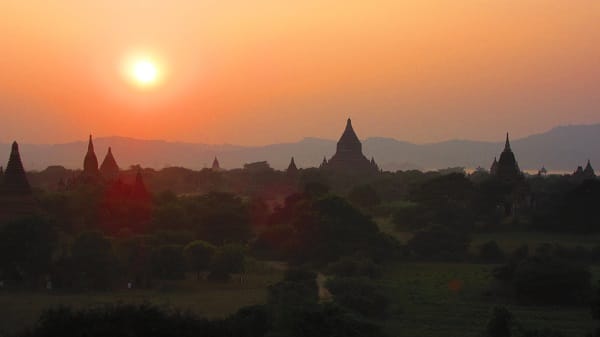 “Stuff your eyes with wonder, live as if you’d drop dead in ten seconds. See the world. It’s more fantastic than any dream made or paid for in factories.”

Nyaung Shwe is, by far, one of my favorite places on this planet. The people are friendly, the town is not overcrowded with tourists, and there is a pancake house for those “sick of eating rice.” Nyaung Shwe is also the access point to Inle Lake. A day-long tour of the lake includes stops at a traditional market, Buddhist temple filled with cats, silversmith, boat maker, blacksmith, umbrella maker, floating garden, lotus thread weaver, wood crafter, and cigar rolling factory. The best stop, however, was at the village of Inthein. We were directed up a long covered walkway which eventually led to Shwe Inn Thein Paya. The grounds are covered with more than 1,000 stupas. The stupas are covered with chimes that ring softly in the breeze. You are instantly filled with a sense of calm and wonder and peace as you listen to the soft chimes, looking at the hundreds of gold, white, and brick stupas overlooking Inle Lake and the mountains surrounding it.

Before I had been there, I typically thought of Angkor Wat as one temple with its five towers surrounded by water or some part of a wall with a tree growing over it. In reality, Angkor Wat is a temple complex that covers over 400 acres. My favorite temple was Bayon. There are 216 giant faces that seem to look upon you with serene, smiling faces. With so many temples to explore, one day is definitely not enough.

Situated about 30 miles outside of Kathmandu, we had occasion to stay in Dhulikhel for a month while my husband worked at the local hospital. Dhulikhel (pop. 16,000) is a town you’d normally pass through on your way to somewhere else. Staying here for a month afforded us the opportunity to get to know several people in the town and see the daily lives of the people of Nepal.

Figures, Spain, is home to the Salvador Dali museum. If you think of Dali only as the artist who painted melting clocks, you are missing out. This was one of the best art museums I’ve ever been to. Of course, I am a little biased as Dali has been a favorite artist of mine and I made the trip to Figures specifically to visit the Dali museum.

Bagan is home to over 2000 temples. Many of the hotels rent e-bikes (similar to mopeds) and provide you with a map so you can visit the temples on your own. There are several large temples that tourists flock to, but if you’re confident enough to get on a bike and go exploring on your own, you’ll find many temples where you are the sole visitor. You can also take a hot air balloon ride over the temples at dawn to gain a completely new perspective of the area.

Battambang is a small town situated between Phnom Penh and Siem Reap and is a nice stopping point if you are busing from one to the other. You can easily find a tuk-tuk driver to act as tour guide for your time in Battambang. Some highlights include taking a ride on the bamboo train, visiting the killing caves, and watching millions of bats emerge from their cave at dusk.

While Da Lat was not originally planned as a destination, we were invited to spend some time in the mountain village and have an authentic homestay with some friends. We spent a week living with a Vietnamese family, helping with cleaning and cooking and even killing a chicken for dinner. Activities around Da Lat include Lang Biang mountain where you can take pictures with a raptor or ride a zebra-painted horse, taking a gondola ride to a monastery and exploring the gardens filled with flowers you’ve never seen before, or exploring Crazy House, an architectural tourist attraction and guesthouse where you can spend the night in one of three treehouses or walk all around and on top of the buildings and trees.

A trip to Ha Long Bay is not complete without a tour of the islands and overnight stay on a boat in the bay. The journey through the islands is stunning. The emerald waters and thousands of limestone islands topped by rain forests will take your breath away. An overnight tour on a junk boat may include stops for swimming, kayaking, and exploring an island.

Named after the first European explorer to sight New Zealand, Abel Tasman National Park is located at the north end of the South Island of New Zealand. The unique thing about this park is that is only accessible by foot or by water. Coincidentally, a sea taxi can take you to several points along the shore and you can arrange to explore the park by foot and have the taxi pick you up at a designated point later in the day.

Penang island is covered in street art. Everywhere you turn there is something captivating to see. When you’re done with the artwork, you can take a funicular train to the top of Penang Hill where you will be afforded views of the city below and the mainland. A short walk leads to Monkey Cup Garden where the head gardener will greet you as if you were her long lost cousin. She will give you a tour of the garden, take your picture, and serve you the best coffee you’ll have in all of Asia. You may also get the chance to hold a scorpion if you’re brave enough to do so.